BFA student Bea Hurd's public sculpture Suburban Wudu was installed in Katherine's Courtyard last week. A work in process for nearly the entire semester, Hurd's sculpture, along with another public art piece by architecture student Jaiden Hughes, will be on view at a reception this Thursday, April 18, 4-6pm, in Marriott Library's Katherine's Courtyard.

Suburban Wudu addresses issues of gender roles and equality, and sparks a conversation concerned about the future of societal values: 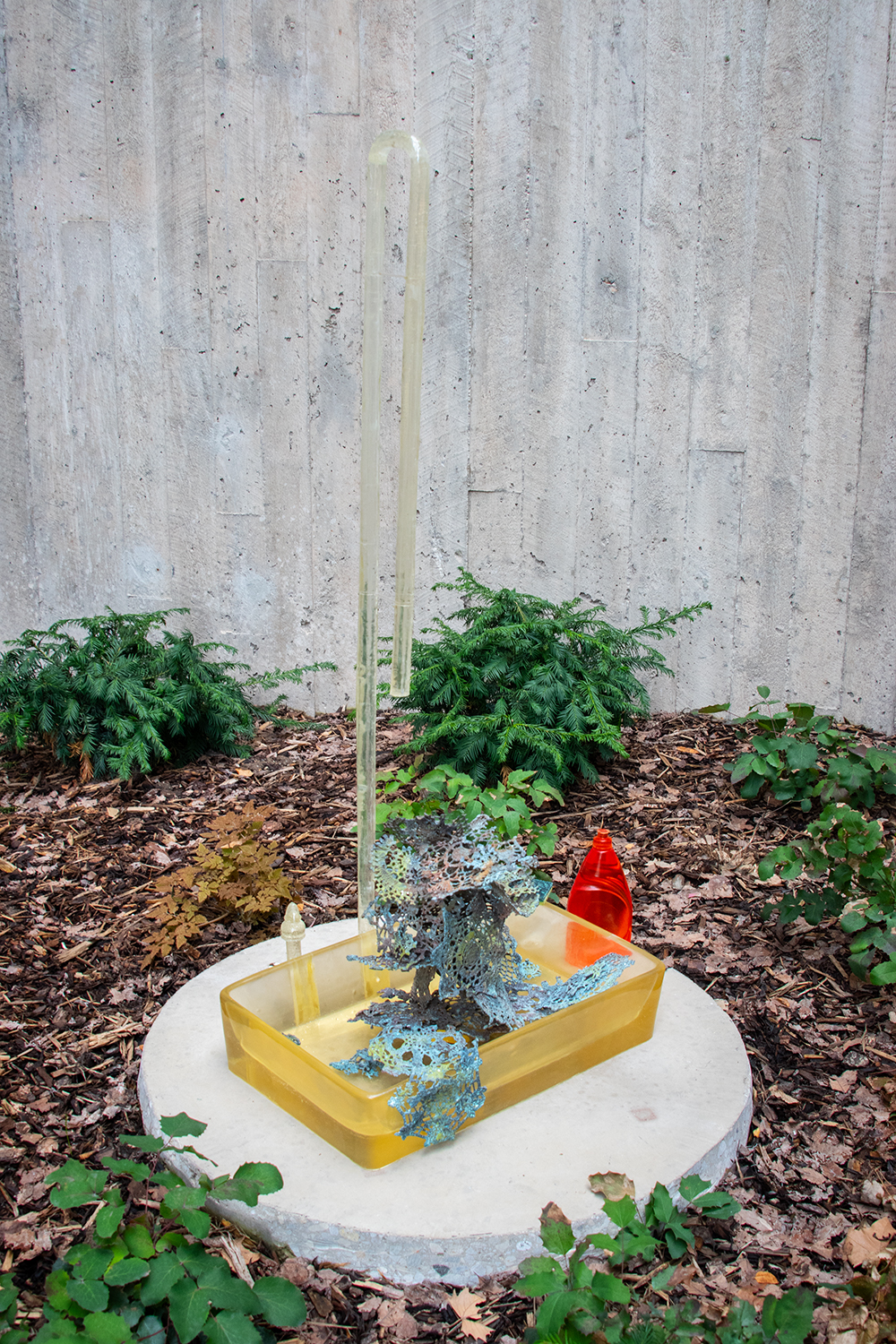 "The doily, a woven ornamental mat, historically is made by women not allowed to work. The kitchen sink symbolizes popular imagery associated with house wives; television has made popular the depiction of women cleaning dishes while upholding social obligation. Combining the doily and the sink, an idea of domesticity is illustrated; domesticity being the expectation that women place their family and home above personal aspirations and career goals. The doily, traditionally seen as a mat on tables, is now placed within the basin of a kitchen sink. The kitchen sink associated with a kitchen setting, is now placed outside in a university library. Combing a kitchen sink with doilies brings melodrama to the topic of domesticity through exaggeration and an unlikely pairing. With a kitchen sink being symbolic of domestic entrapment, and a university associated with establishment of careers, placing the sink in a university library visually represents the tension between a women’s desires and the desires of societal norms. Through a series of displacements, the piece asks where women should be, where should their energy go, and brings attention to ideals of how women should live their life.

The floating arrangement of the doilies appears as though women are “throwing in the towel” of domestic labor, causing the piece to be in a moment of rebellious action. The doilies appearing more aged near the basin, creates history for the issue as one affecting newer generations, as it did our grandparents. Placing the basin on the ground alludes to the Islamic tradition, Wudu. The washing of body parts (in particular feet) before formal prayer. In Islam, achieving godliness is associated with cleanliness. In Mormonism, women forsaking personal aspirations to concentrate on tidying the home and caring for the family, is seen as means to achieve similar godliness. Juxtaposing Islamic literal cleanliness ideals, with Mormon ideals of women’s responsibility for home and family cleanliness, recontextualizes and further displaces the concept of domesticity."

The process of making the piece was extensive. With the help of her faculty mentor, Kelsey Harrison, and numerous classmates, especially sculpture students Natalie Cheatham and Nate Francis, Hurd employed many processes to make up the components of her sculpture. Hurd says "It was a process of many small processes: that included making/accumulating the objects I wanted to make molds of, making the molds, casting the final objects from those molds, the entire process and all the preparation for a bronze pour, and the assembling of my sculpture. I also had many days of experimentation with process and material as many of the processes I was going through for this piece were completely new to me."

Taking the sculpture to another level, she delved into transforming her raw materials into new visual forms: "The basis of my sculpture was media translation- instead of a ceramic sink, I wanted a clear resin sink, instead of lace doilies, I wanted bronze doilies. I basically spent my semester learning the ins and outs of mold making and how to translate objects into new materials. I made silicone molds of a sink, the faucet, handles, a soap, and a sponge, then casted those objects using a clear resin. The whole process of learning to make and cast from those molds took about a month, numerous demonstrations from my project mentor, and endless days in the studio."

Congratulations on a successful and thought-provoking work, Bea! Suburban Wudu will be on view in Marriott Library's Katherine's Courtyard until fall semester 2019. 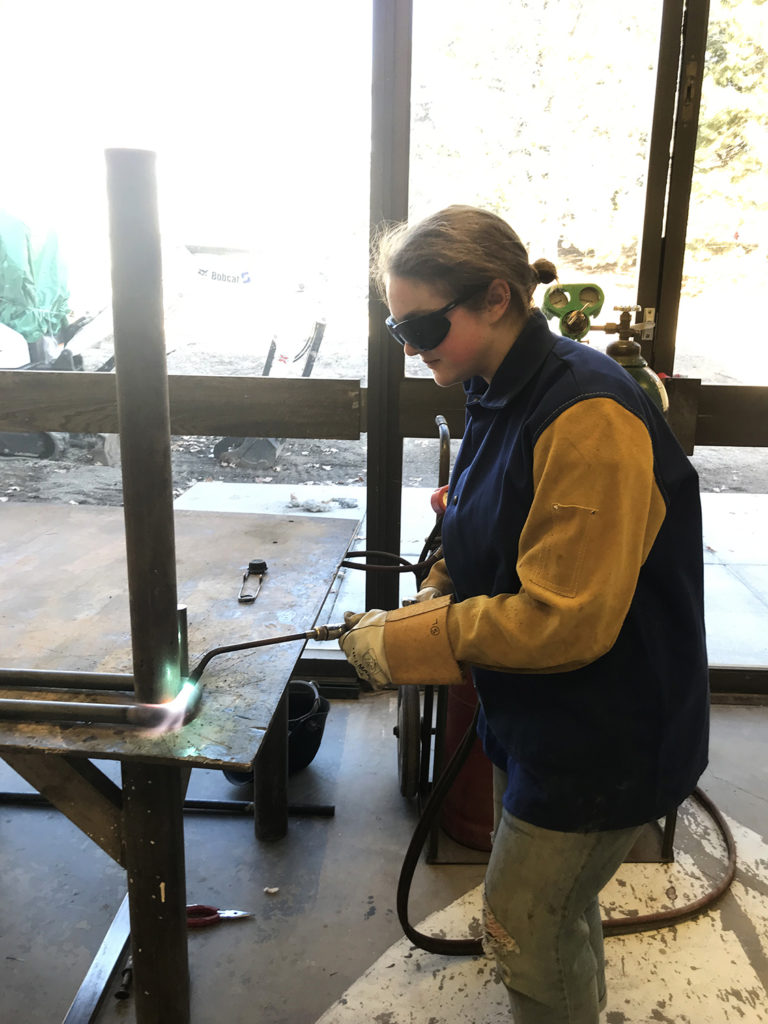 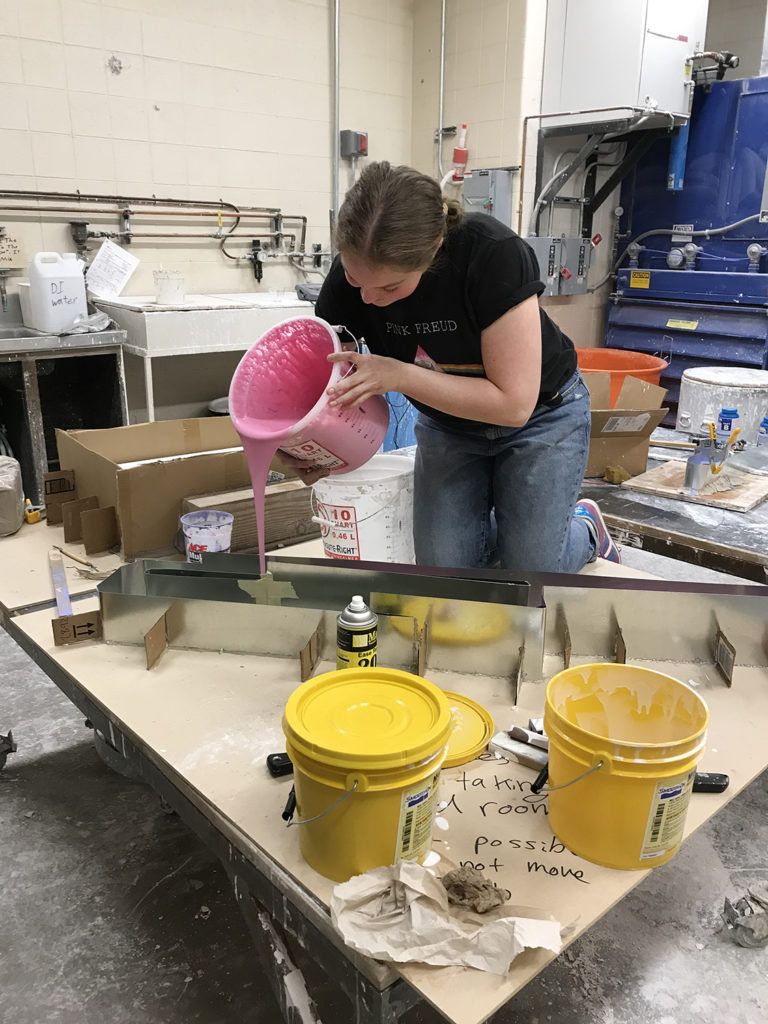 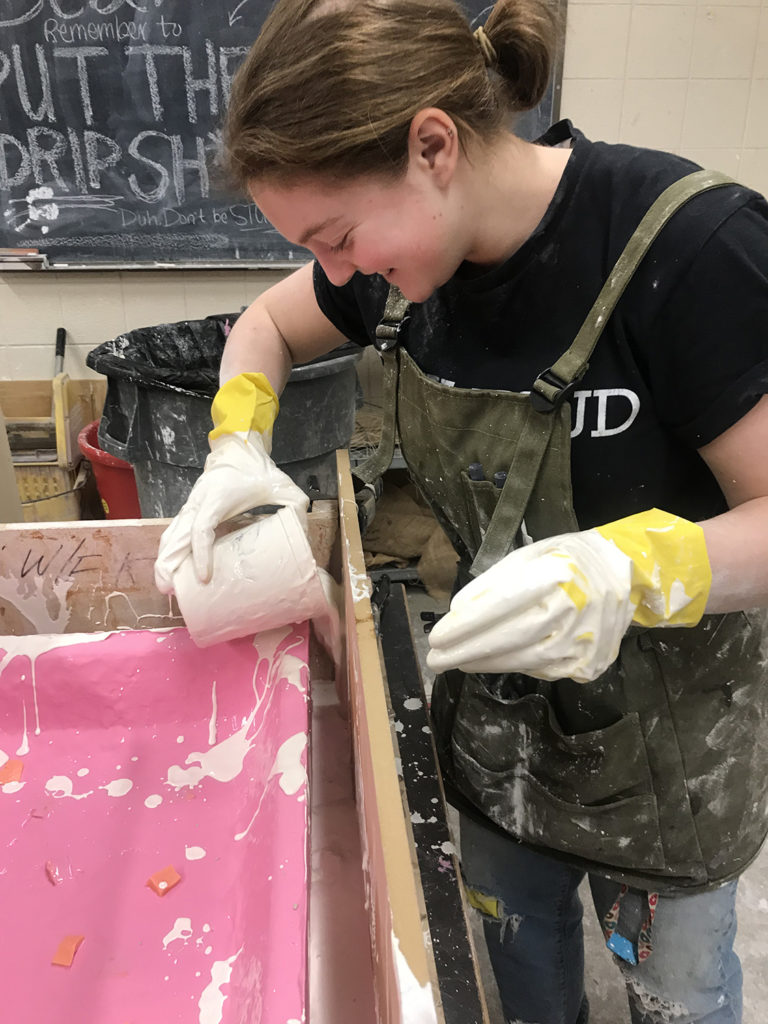 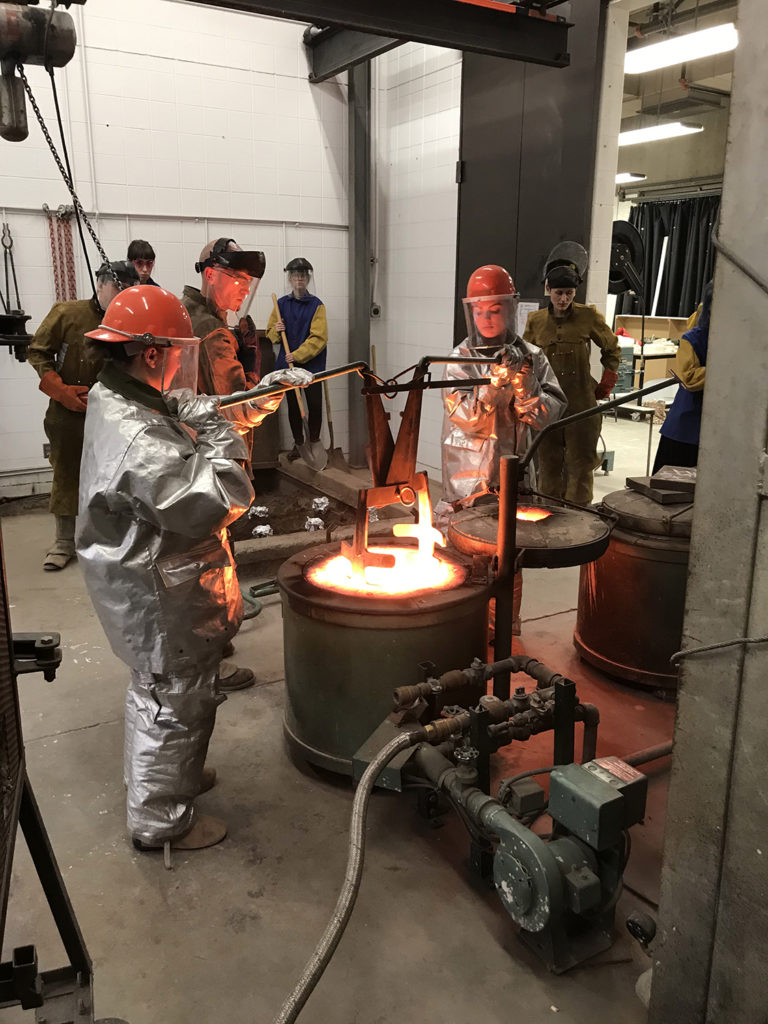 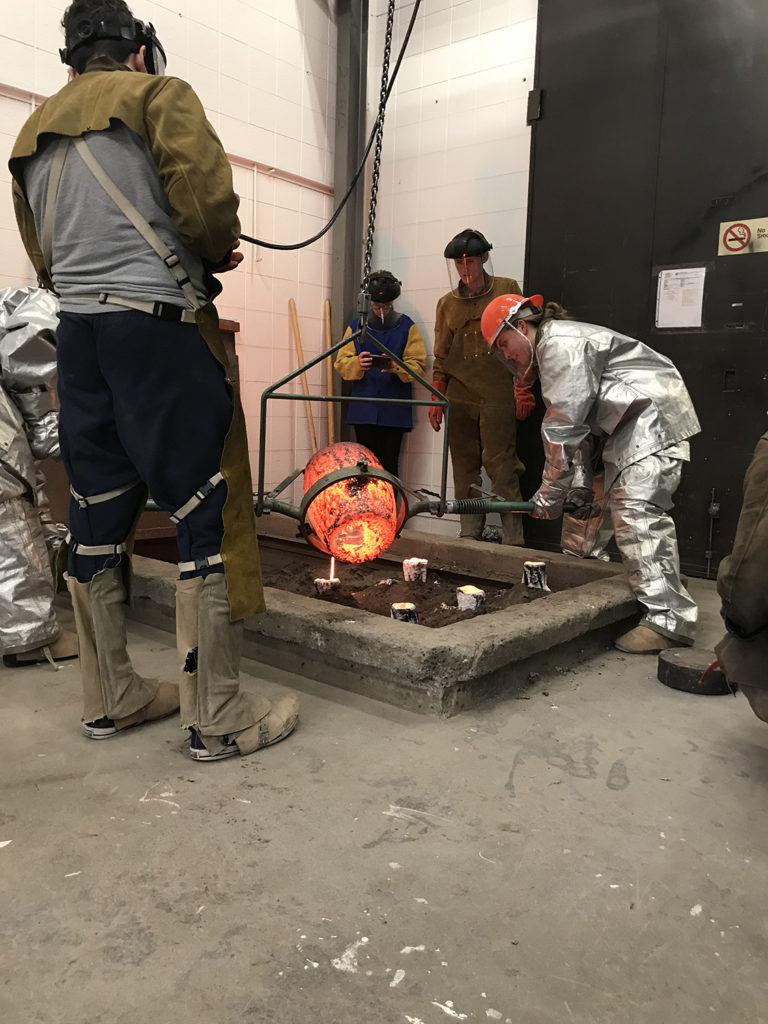 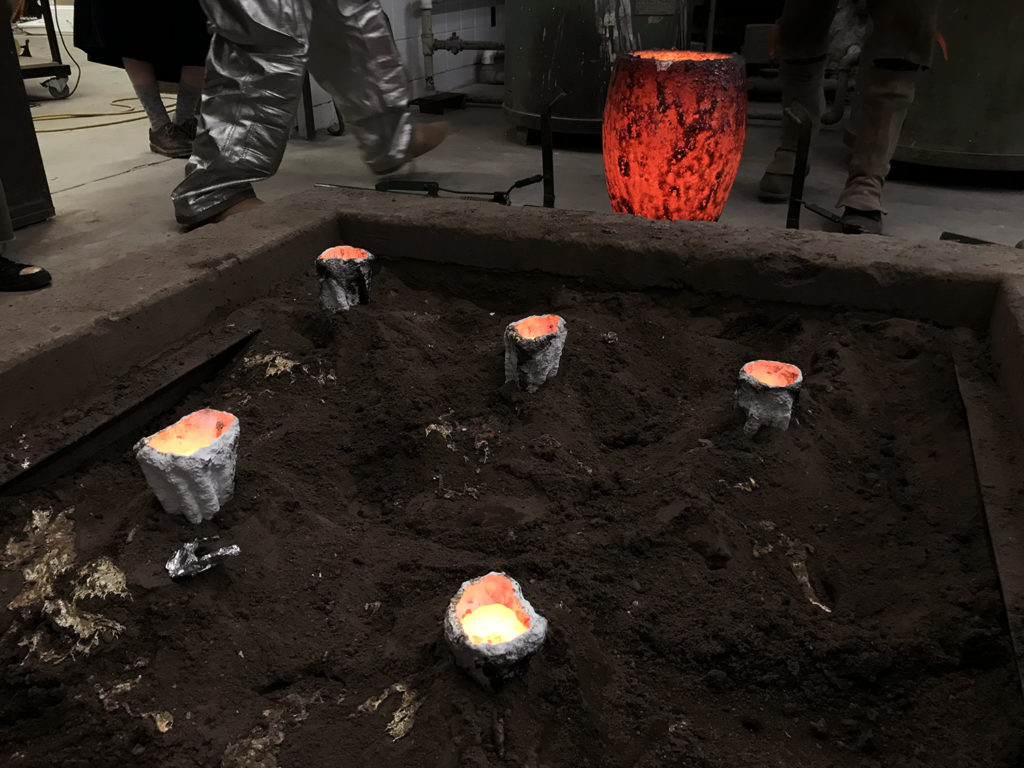 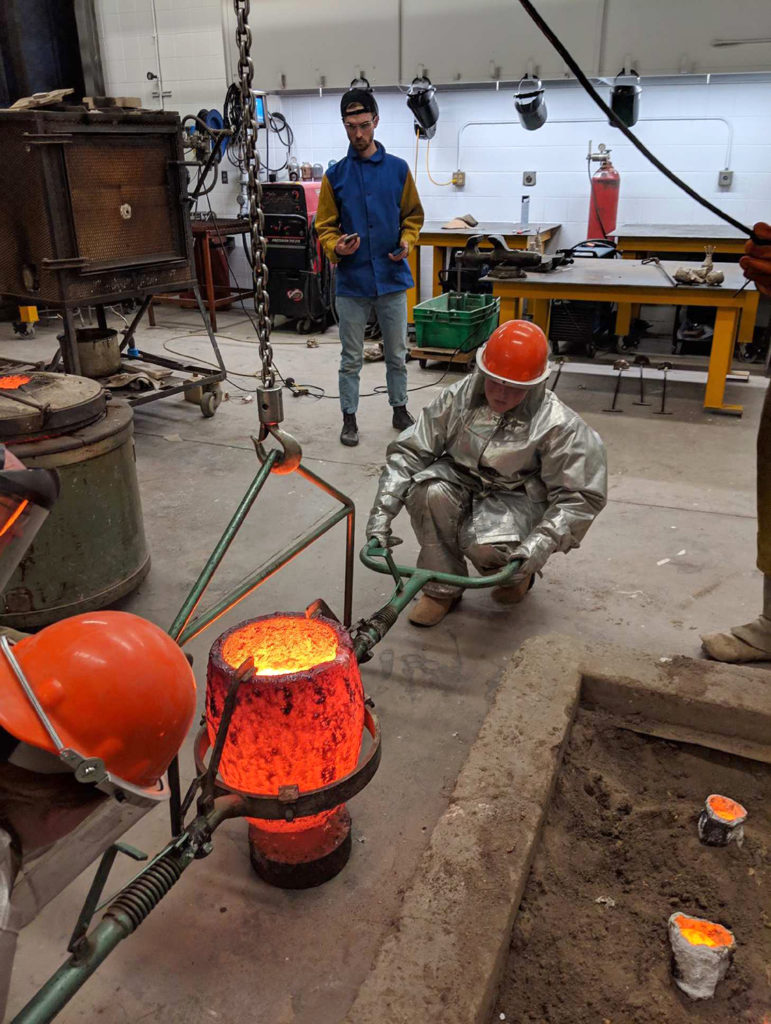 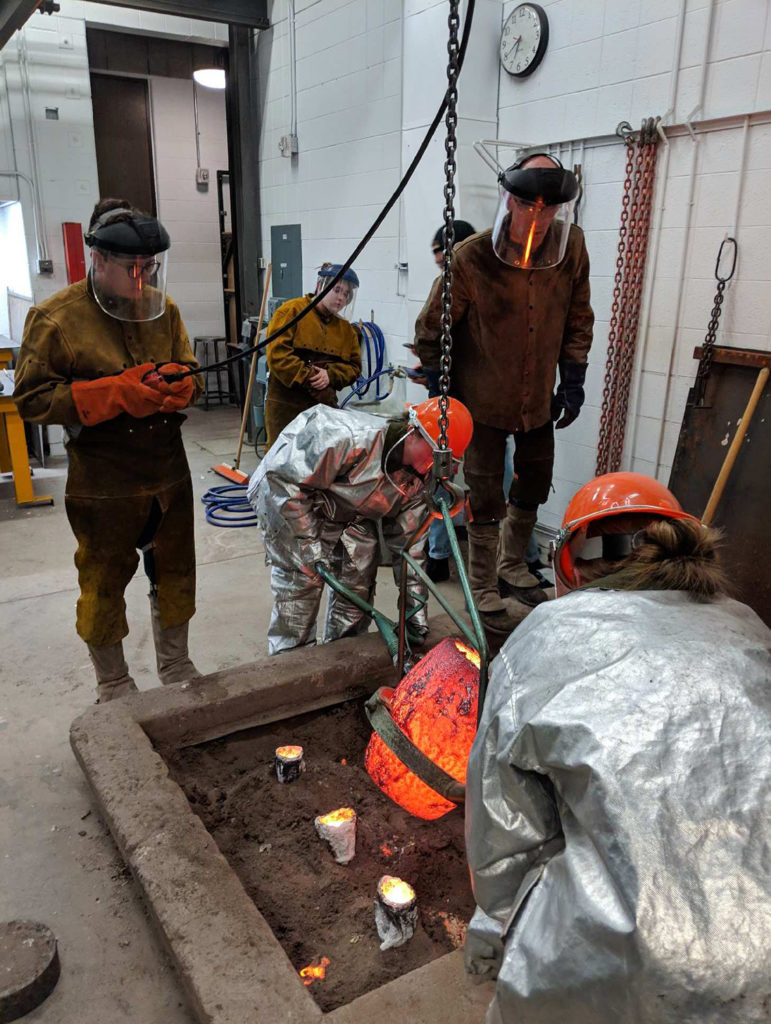 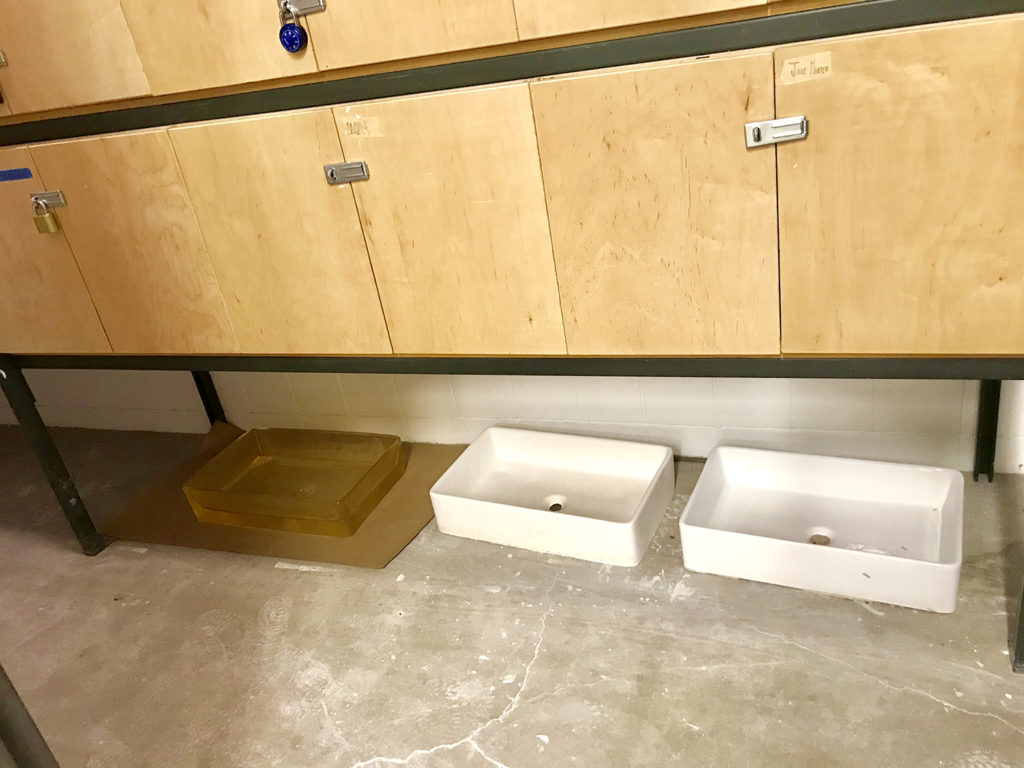 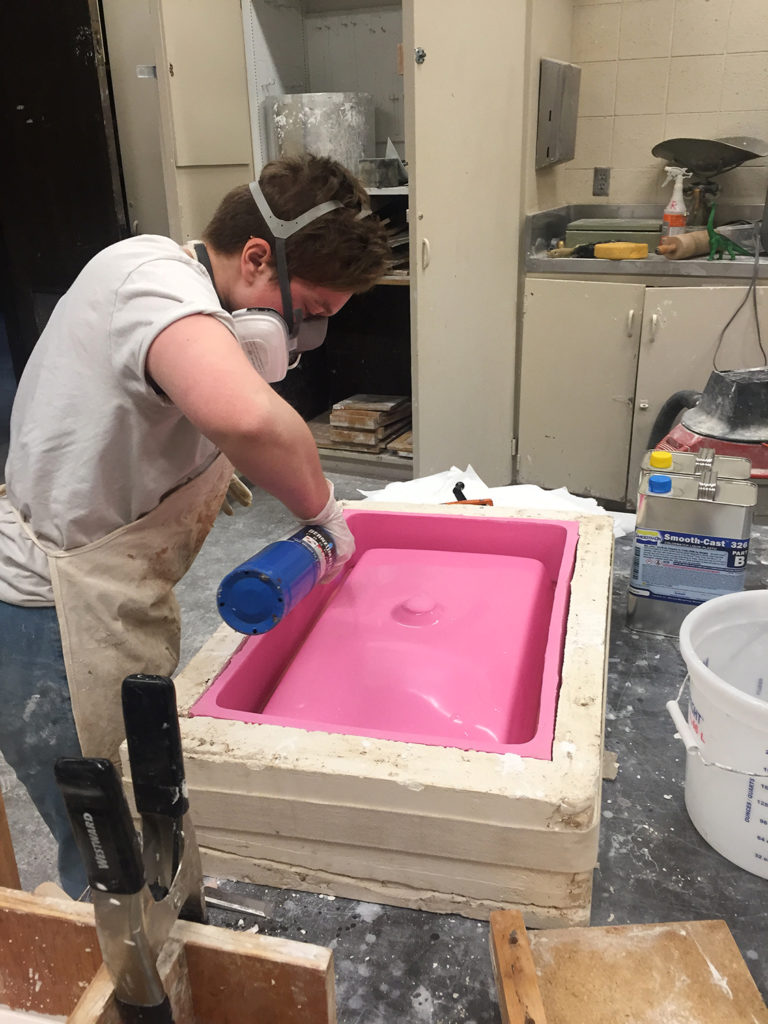 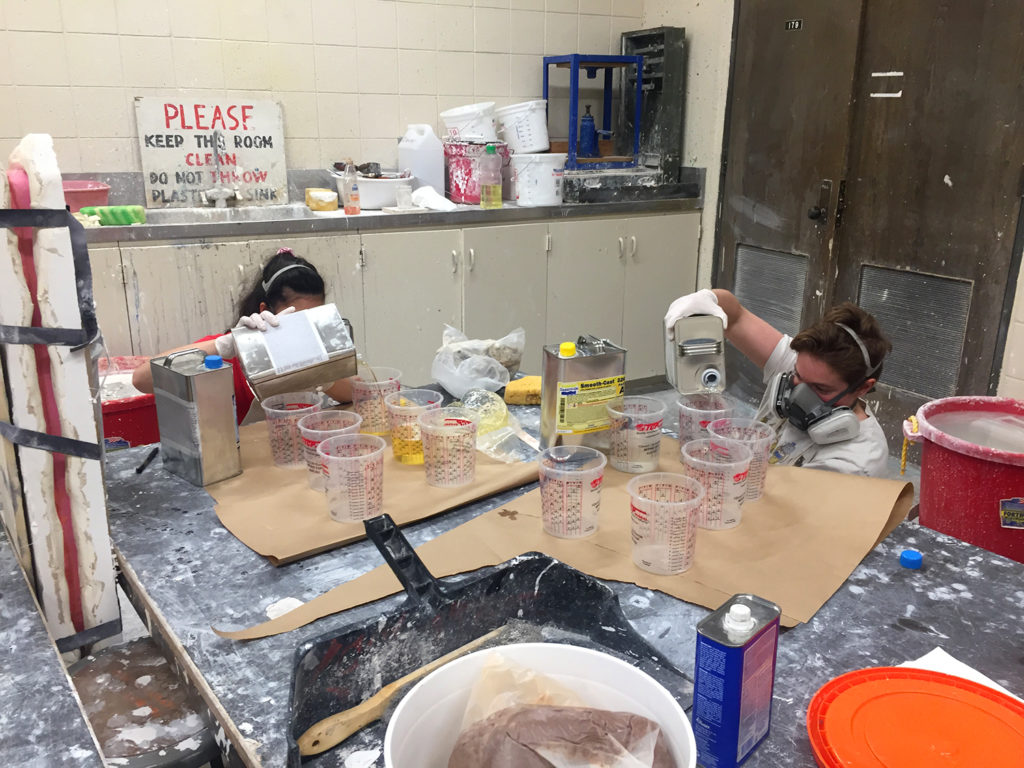 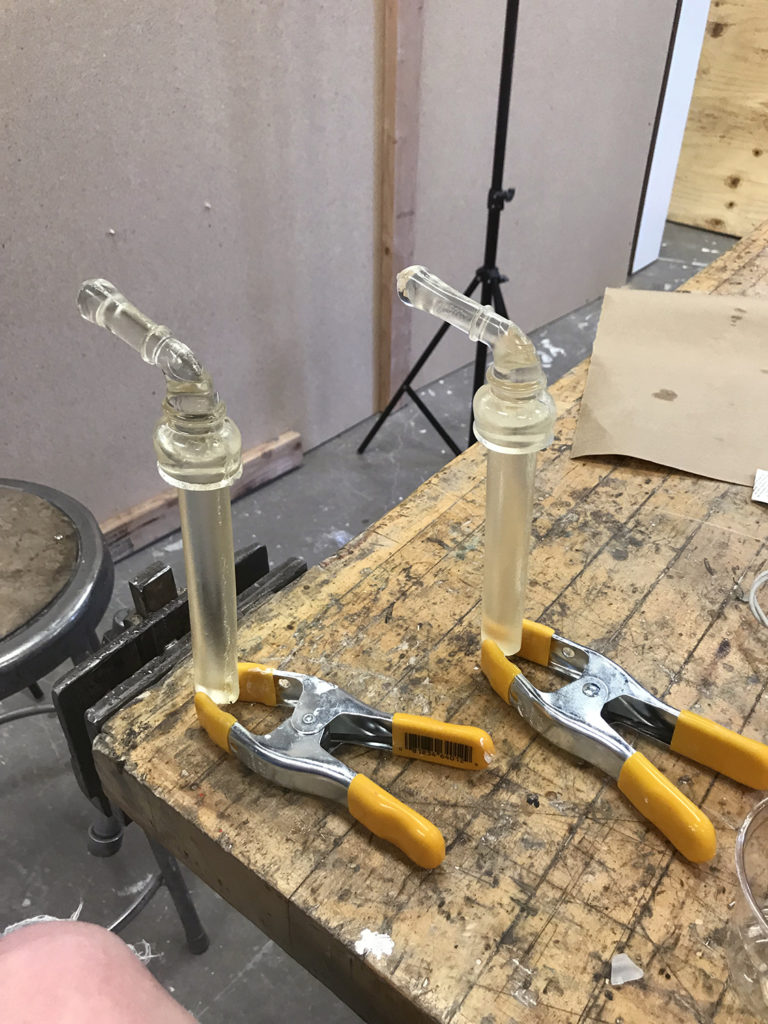 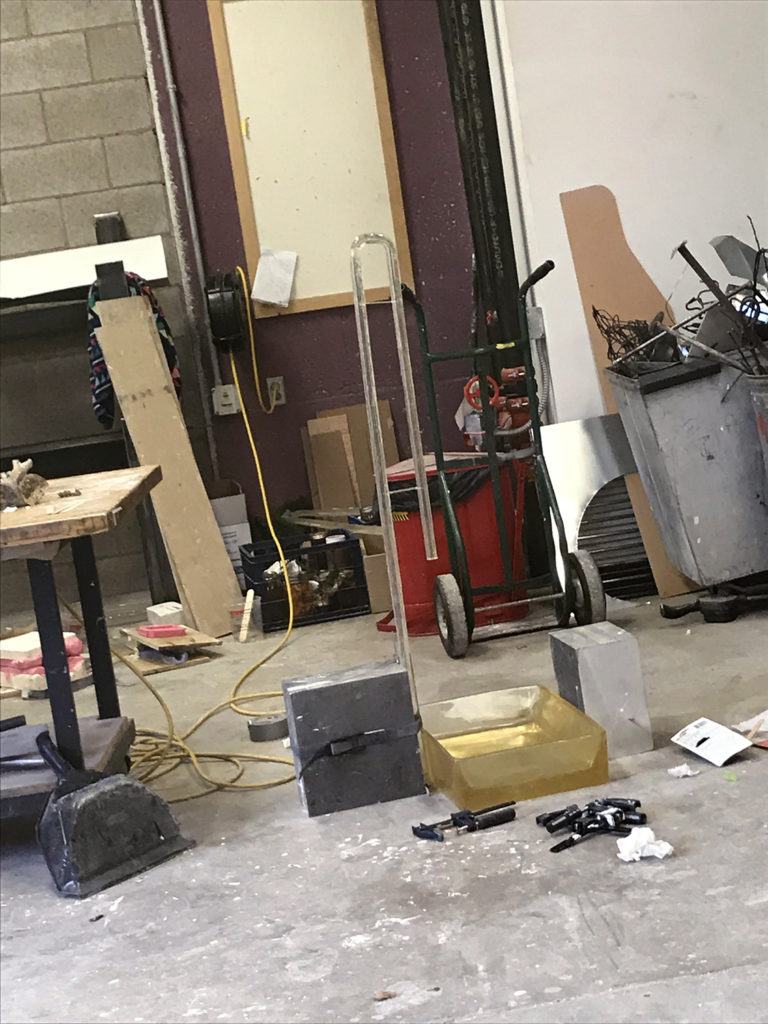 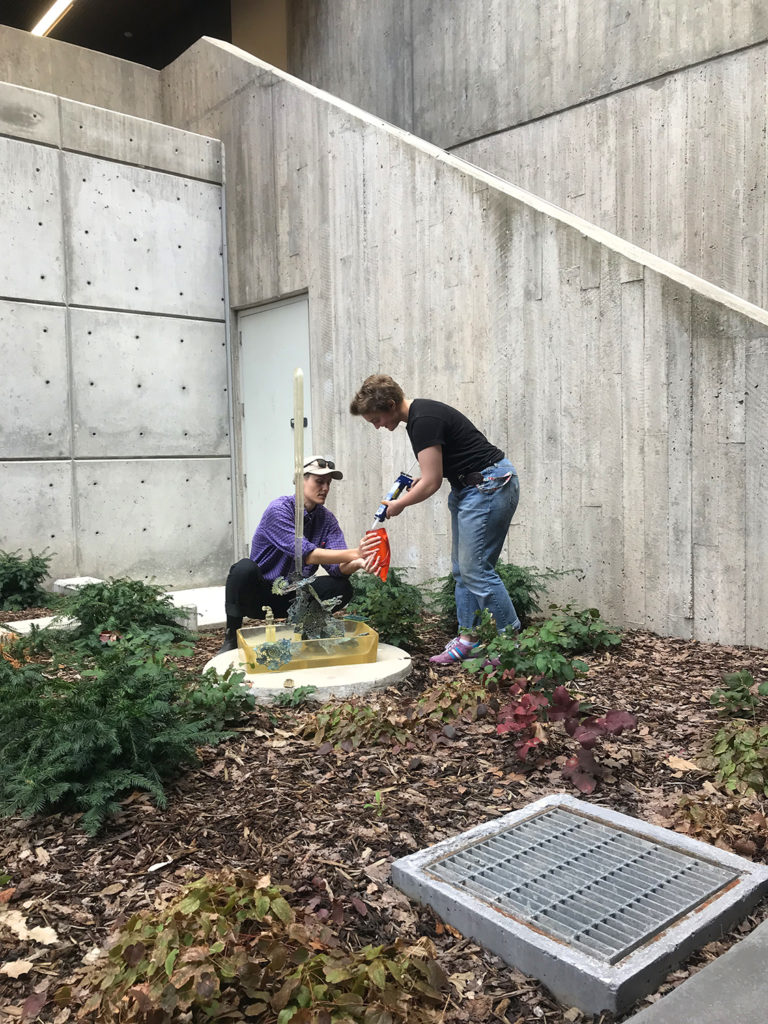