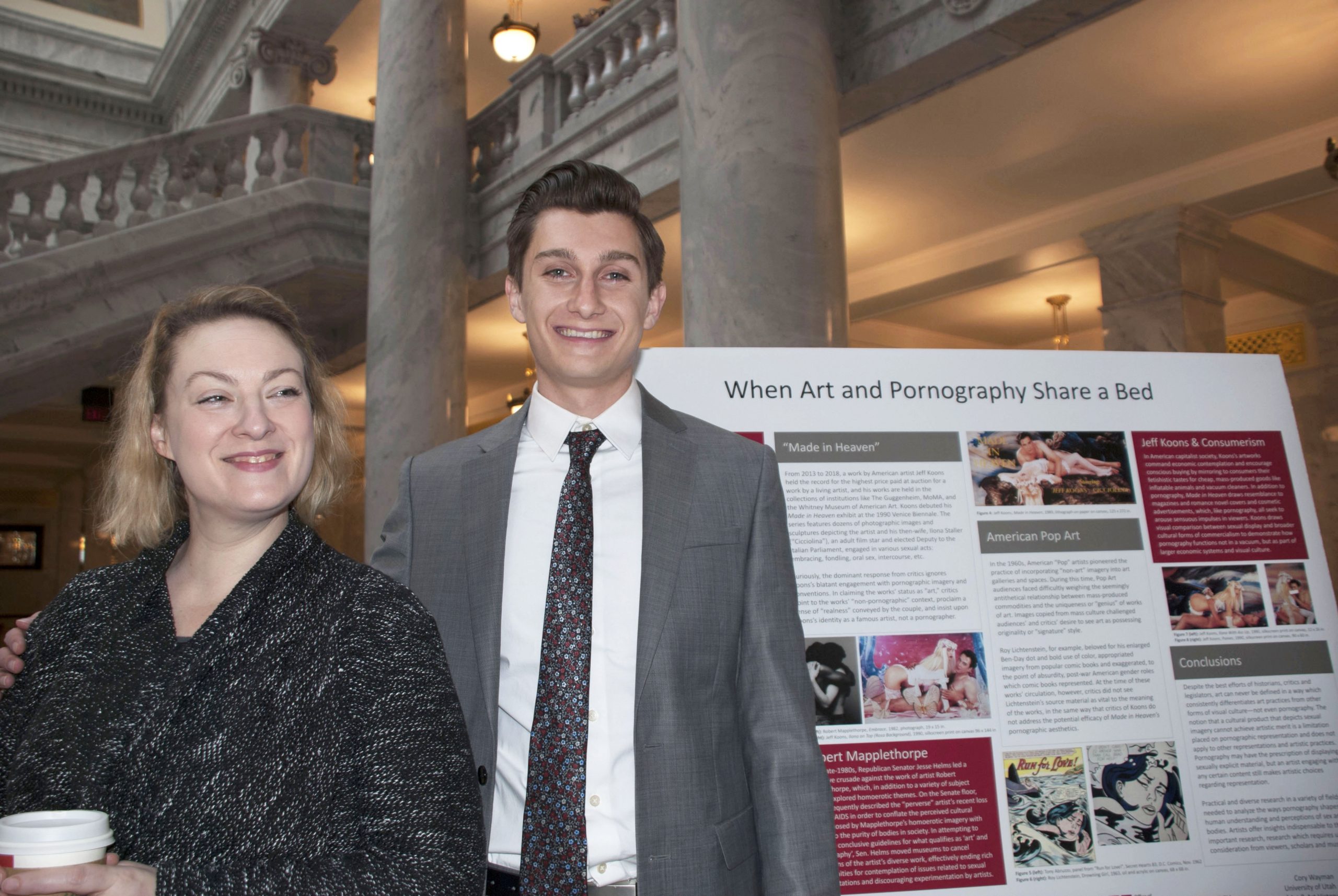 Each year, the Office of the Vice President for Research, the Office of Government Relations and the Office of Undergraduate Research select students to exhibit their work via posters to Utah State legislators. At this event, legislators and their staff members learn about the importance of undergraduate research and creative work through talking directly with the student researchers involved in these programs. This year, Art History student Cory Wayman was selected to present his work exploring the relationship between categories of visual art and pornography. Working with his Honors Thesis Advisor, Art History Professor Sarah Hollenberg, Wayman's thesis, "Made in Heaven? When Art & Pornography Share a Bed," will culminate in an Honors Bachelors degree in Art History and Sociology. He says of his research:

Art in the western canon has long demonstrated interest in the erotic. Since as far back as ancient Greece and then with renewed interest during the Renaissance, artists have traditionally been commissioned to produce sexually-graphic images. To understand how this tradition has carried into the modern age, I analyze a series by one of the most prominent figures in the contemporary art world, American artist Jeff Koons. This series, entitled Made in Heaven, from 1990 engages with visual forms of modern pornography quite directly, and features highly-explicit photographs and sculptures depicting the artist and his then-wife, Ilona Staller, performing a variety of sexual acts.

After reading the published criticism on Koons’s work, what I found interesting and what prompted my research is how viewers repeatedly sought to downplay the works’ engagement with pornography and argued for the works’ status as ‘art’, stressing that they are not ‘pornography’. Lacking in these discussions of these artworks is any consideration of how Koons’s use of pornographic conventions might offer new insights and understandings into the ways both art and forms of popular media work in shaping our perceptions of nude bodies and sexuality. These are, of course, important issues to consider given the current state of pornography consumption in the US. (Pornhub.com receives upwards of 80 millions visitors a day, which is more daily traffic than news sites like CNN, less only than platforms such as Google, Amazon and Facebook).

I hypothesize that part of the reason art audiences seem apprehensive to consider the term "pornography” in their discussions of art is largely a result of one major cultural and political development of the late 1980s, when Republican Senator Jesse Helms took to the Senate floor on a mission to censor the work of the artist Robert Mapplethorpe and establish definitive distinctions between ‘art’ and ‘pornography’. Helms’s decision to prosecute a contemporary artist in Congress sent shock waves throughout the art world. For fear of having funding revoked, museums cancelled their exhibitions of Mapplethorpe’s work, resulting in large protests motivated by concerns over artistic freedom, and artists working in the 90s became discouraged from experimenting in their work.

I argue that practical and diverse research in a variety of fields is needed to analyze the ways pornography shapes human understanding and perceptions of sex, and that artists offer insights indispensable to this important research. The unwillingness of viewers, museums and legislators to honestly explore works of art that engage pornography will result in the pornography industry going unexamined, left to its to its own devices in visual culture.